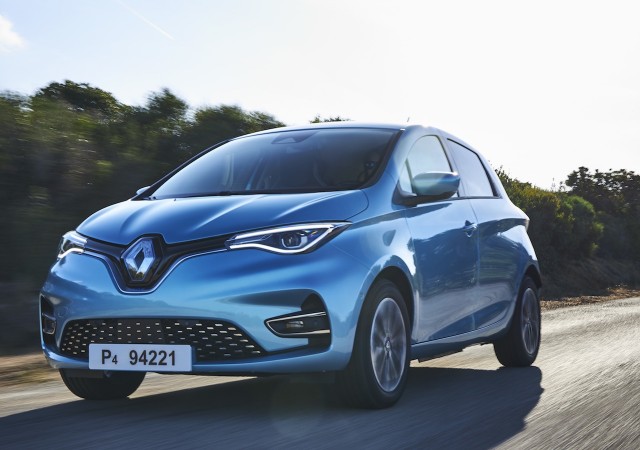 Italy’s EV market is finally getting hot. Following months of unprecedented growth and despite an incredibly adverse time in history, electric mobility has now reached the halfway point of this infamous year with outstanding figures, doubling sales from 2019. And the most important aspect is, we haven’t seen anything yet.

Most people who follow EV sales will know that Italy’s car market (Europe’s fourth largest) is by no means among the fast adopters of EV technology. Market share of hybrid and fully electric cars lags behind that of other European nations such as the UK, France or Germany, let alone Scandinavian countries. This is due to several factors, the main two perhaps being the very low average selling price of cars (typically around €20,000 including VAT), and the lack of EV models – at least so far – by its main domestic car manufacturer Fiat.

Nonetheless, such limitations have not prevented the Italian BEV market from booming in the first six months of 2020, doubling year over year to about 10,000 units, while the overall car market instead sank by almost half (-46%), totaling less than 600,000 registrations – about half a million less than a year ago – as a consequence of the ongoing coronavirus emergency (see Unrae stats). This means market share of fully electric cars now stands at 1.7%, up from 0.46% just a year ago. Plug-in hybrids have less traction in the country, although they enjoyed an even better growth rate than BEVs, scoring about 5,800 registrations to June, up 132% from 2,700 units in the first half of 2019. PHEVs market share is now at 1% from 0.22% last year. 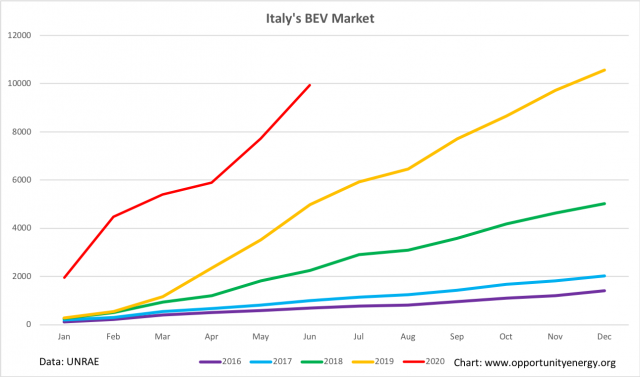 The current rate of adoption of full electric cars in Italy seems to be following an exponential trend that’s been consistent over the past five years, something the pandemic did not change – as eloquently shown in the chart above.

Driving this exponential growth – as seen month after month – are compact models that are the most popular segment on Italian roads. This is no market for premium cars, which makes it all the more interesting as it shows the path to electric mobility from a broader base of potential customers. So what does the market look like halfway through the year? The Top 10 chart gives us a great snapshot. 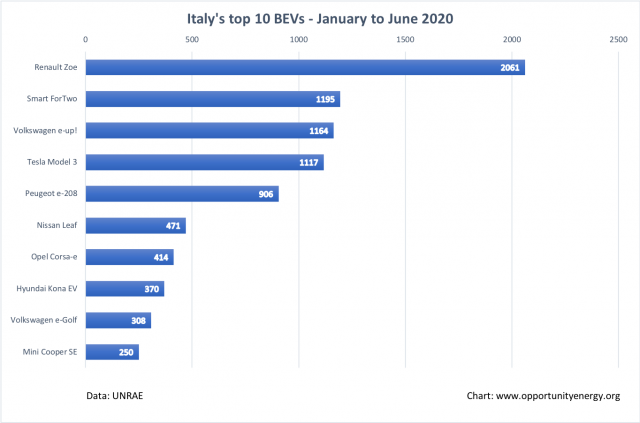 Unsurprisingly, Renault Zoe sits firmly at the top. The small French electric car is selling like never before throughout Europe; in Italy, it finds its perfect playground. With over 2,000 registrations to date, Zoe has already sold almost as much as in the entire 2019, and looks set to break new records, claiming over 20% of the nation’s BEV market. It is unlikely it will be dethroned by any other model over the next six months. At a distance from Zoe’s incredible performance, Smart ForTwo and Volkswagen e-up! follow in second and third position with almost 1,200 units each. The baby VW in its updated, longer range package is naturally suited for city driving and it’s not surprising to see it as a contender for top spot, along with the posher Smart car (last year’s best selling BEV in Italy).

Fourth place in the chart is taken by an outlier: Tesla Model 3. The only premium, non-compact model in the Italian Top 10 (with 1,117 registrations to date) shows how even a €50,000 electric car can sell well in this price-sensitive market, as long as it’s a compelling product and part of an advanced technological ecosystem. Bmw, Audi and Mercedes better take note.

Covering the fifth spot at 906 units, Peugeot e-208 confirms its predictable success as a hot new entry in the ultra competitive B-segment. We can expect this and related PSA models to become a stable presence in the top selling positions of Italy’s electric market in coming months. Together with the e-208, sales of the top five full electric models contribute for almost two thirds of total BEV registrations to date and stand in a league of their own. The other five models that complete the Top 10 chart follow in fact with much lower figures, with the likes of Nissan Leaf and the new Opel Corsa-e trailing behind at less than 500 units each, with the brilliant Hyundai Kona EV at only 370 units (hard to believe the compact Korean SUV could not see much higher numbers, if they produced enough of it).

As we move past the halfway point, what can we expect over the next six months? If the coronavirus did little to rein in EV sales in the first half, the second part of 2020 is primed for a new upward shock. The imminent entry into the market of crucial models such as the new Fiat 500e and the VolksWagen ID.3, both expected in September, could on its own add several hundred units to BEV monthly sales. On top of this, the new and enhanced EV incentives just approved by Italy’s government to spur economic recovery are set to substantially increase demand in a market so sensitive to pricing.

While it’s difficult to predict how all variables will play out, electric mobility is poised for major acceleration in the unforgiving Italian market. A 50% to 100% increase in full electric car sales to 15/20,000 units could be expected in the second half of the year – and if legacy automakers get serious there could be more surprises ahead. As the overall domestic car market shrinks (about 1.2 million car registrations are now expected this year, down from 1.9 in 2019), this means an annual total of 25-30,000 BEV sales would see full electric cars easily quadruple their share from last year’s levels to above 2%. The beauty of exponential growth means we are just getting started.