Marchionne is last to join the EV bandwagon, but can Fiat still compete? (Part 1) 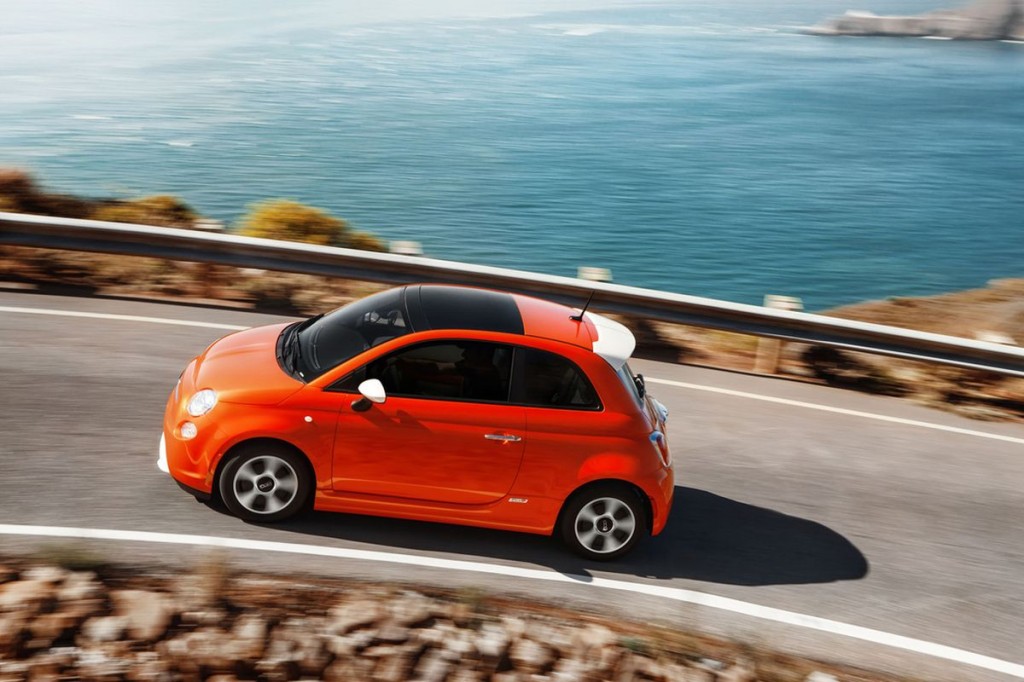 Fiat Chrysler’s CEO Sergio Marchionne unveiled his last 5-year industrial plan for the Italian-American carmaker a month ago in Turin, Italy. The much anticipated event did not disappoint, as the CEO – now 14 years into his reign at the helm of FCA – confirmed the company would be finally rid of its long standing debt in a matter of weeks (the debt stood at €4.58 billion in 2016). More importantly, in a major U-turn from past statements, Marchionne announced a major investment of 9 billion euros aimed at the electrification of Fiat Chrysler models to the detriment of diesel engines – to be abandoned by 2021 -, finally bowing to the technological revolution that is changing the face of the global car industry at ever faster pace.

Fiat’s financial wizard made it his life mission to close out the company’s debts and reach profitability. He succeeded by adopting a very lean industrial approach, maximising profits based on existing technologies and minimising investments in Research & Development, while also capitalising on spin-offs of the best brands (see Ferrari). All of this made Sergio Marchionne the Wall Street analysts’ darling and helped Fiat quadruple its shares’ value since 2014. But can Sergio’s financial genius survive the capital-intensive tech race to Car 2.0, also known as the electric car? Let’s rewind just a little. 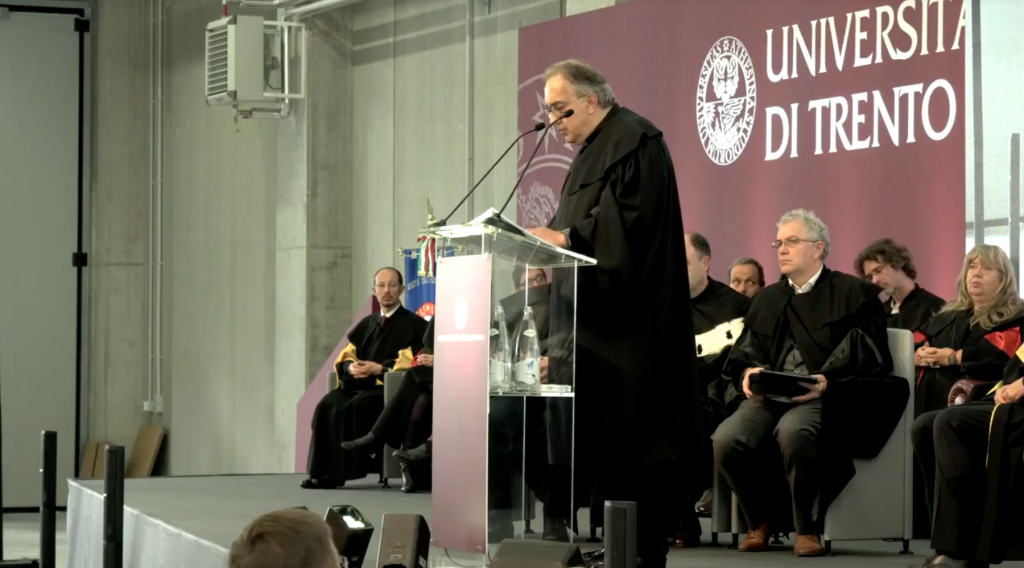 Marchionne Vs The Future

Marchionne has been for years one of the most outspoken critics of EVs, to the point of inviting potential American customers of his Fiat 500e compliance car not to buy one as he’d lose $14,000 on each unit sold. But the irony goes on: as recently as last October, his acceptance speech for an ad honorem degree in Industrial Engineering at Italy’s Trento University focused entirely on innovation and technological changes in the industry. What did he say? Brace for bullshit:

“At FCA we’re working on all kinds of electric cars: from 48-volt light hybrids to traditional hybrids, plug-ins and totally electric systems. But we can’t ignore some important elements. Let’s take for example, the electric 500. [...] We introduced it five years ago [...], truth is, for each 500e we sell in the US we lose about 20,000 dollars. An operation that, if carried out on a large scale, becomes an extremely masochistic act. But the limits on electric technology are not just about cost, range, charging [...]. Globally, two thirds of electricity derive from fossil sources, coal [...] accounts for about 40%. [...] The emissions of an electric car, if the energy is sourced from fossil fuels, are at best equivalent to those of a gasoline car.”

The story about EV costs is Marchionne’s favourite (and apparently he loses more money now than before!). He should perhaps take notes from his competitors, such as VW-Audi Group, which is seemingly sourcing batteries at around €100 per kWh for its upcoming EVs. As to CO2 emissions’ figures, Sergio’s statement can be easily dismissed by checking real world energy mix data, as shown for instance in a European think tank’s study. Even in coal-intensive countries such as Poland and Germany (Europe’s worst!), EVs’ life-cycle emissions will be much less than for a conventional car. A neat chart exemplifies it clearly below, no scorched Earth in sight. 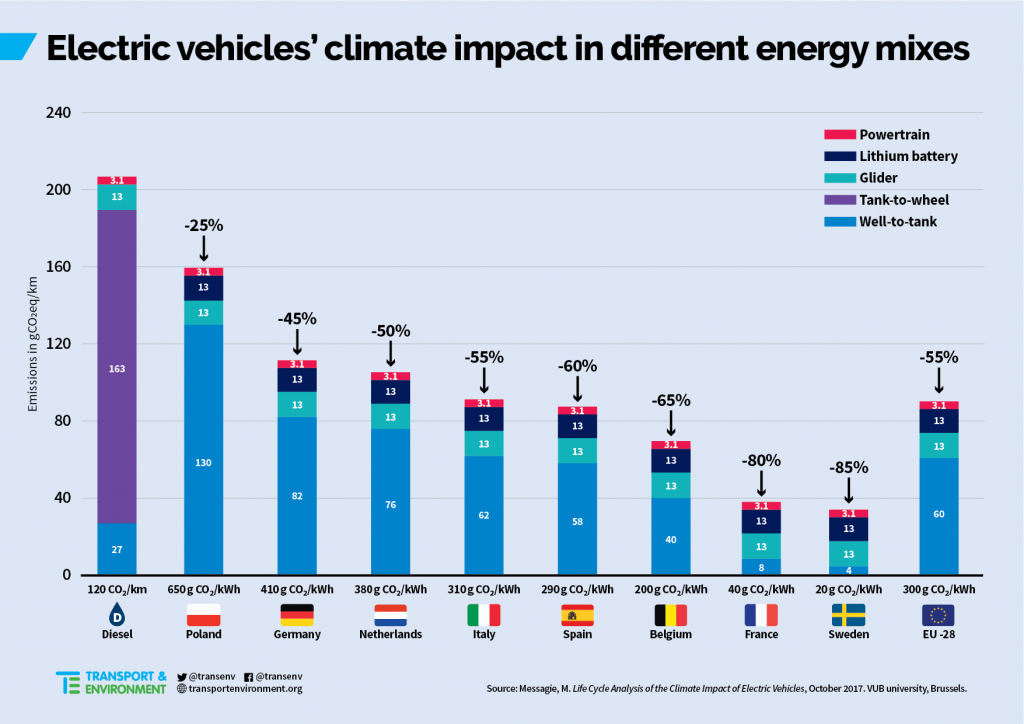 “We have to be realistic. Electric cars may look like a technological marvel, above all to reduce emission levels in urban centres, but they are a double-edged sword. Forcing the introduction of electric [powertrains] on a global scale, without first solving the problem of how to produce energy from clean and renewable sources, represents a threat to our planet’s very existence. The electric [transition] is an operation that needs to be carried out without legal impositions, while continuing to exploit and integrate the benefits of other available technologies. It’s certainly more useful to focus on improving traditional engines and work on increasing the use of alternative fuels, especially methane, which in terms of origin and quality is currently the most virtuous, and the cleanest in terms of emissions.”

Sounds like the words of a true visionary. Can someone please inform Mr Marchionne about the ongoing renewable energy revolution he is apparently unaware of? Also, do update the CEO on fracking when he talks of methane “virtues”. But wait, enough with his thoughts from eight months ago. Things have changed. Fast forward to now.

This entry was posted in Gotta Be Kidding, Green Cars, How hard can it be?. Bookmark the permalink.

4 Responses to Marchionne is last to join the EV bandwagon, but can Fiat still compete? (Part 1)