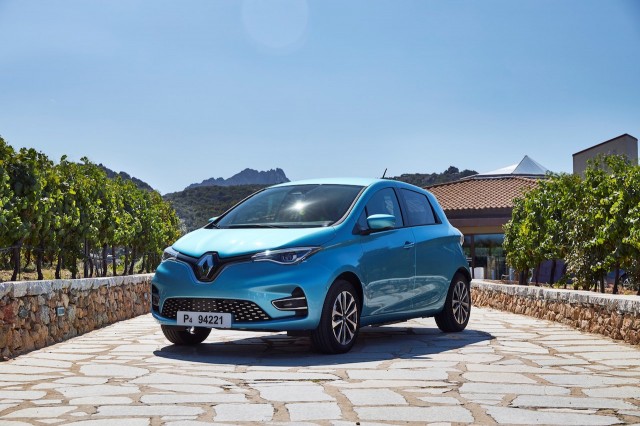 February sales figures for the Italian EV market were awaited with interest, following a great start of the year last month. Would earlier trends be confirmed? Stats released by Unrae are now out and the numbers don’t disappoint, in fact new record sales mean that exactly 10 times as many full electric cars were sold in February 2020, compared to the same month last year.

2530 fully electric cars were sold in February (they were just 253 this month last year), a new all-time high that also tops by 30% the previous record of 1943 units sold in January. In a domestic car market that is down 8.4% year over year for the month – less than 164,000 cars sold compared to almost 179,000 in February 2019 – electric mobility shows no sign of stopping its march to mainstream, reaching 1.5% share of BEVs, an unthinkable figure for Italy’s car market only months ago. Plug-in hybrids also achieved good numbers with 1219 units (up from 269 a year ago) for a 0.7% share of the market, but it’s increasingly clear that interest for PHEVs is not as strong as that for BEVs despite the growing number of available models.

Meanwhile, diesel cars continued their downward trend, losing almost 30% monthly registrations year over year, while retaining a 34.8% market share (45.1% a year ago). It is clearly a tough moment for traditional models, as petrol and non plug-in hybrid cars are unable to offset declining diesel sales. On the flip side, this reality is set to proportionally benefit electric cars, now heavily advertised by all brands as they push their own new electric models to comply with tough 2020 EU standards. The 30% increase in BEV sales in one month alone shows there is still a lot of untapped potential, with consumer awareness steadily shifting from old to new in exponential fashion, building on the trend of the past three years.

As recent dynamics seem to be consolidating (net of any Coronavirus considerations that will likely affect all markets going forward), it is also great to see a growing number of BEV models competing for top spots, as well as new models making their Top 10 debut. 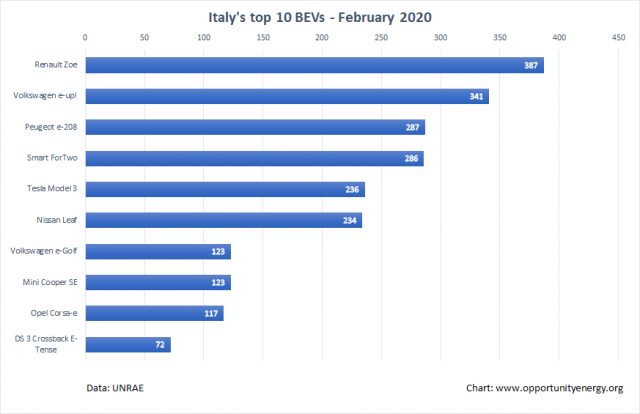 The February podium remains almost unchanged from a month ago, with the Renault Zoe firmly on top with 387 units but now followed closely by the updated VW e-up!, which overtakes the brand new Peugeot e-208 now in third place. Growing success of the new e-up! does not surprise and it can be expected to gain further momentum. A very close fourth is again the Smart ForTwo. Could these be the models that will battle for 2020′s first position? It may be too early to say, as Tesla Model 3 and Nissan Leaf sprung back up with solid numbers following underwhelming January figures, while the Mini Cooper SE and Opel Corsa-e finally debuted in the Top 10 chart.

We should expect more newcomers to climb their way through the charts in the next months, as European manufacturers fight for their share of the EV market with new models and aggressive pricing. The VW e-up! siblings (Seat Mii electric and Skoda Citigoe iV) should do really well in this market, and so will models expected in the second half of the year – the new Fiat 500e being a prime example. It’s interesting to note how the electric versions of the VW up! and Peugeot 208 already account for sizable shares of those models’ overall sales in the country: 8.5% for the e-208 and a surprising 22.5% for the baby VW, which goes to show how EV technology is now ready for mainstream, from city cars to luxury SUVs.

The first two months of the new year are marking the beginning of a quiet revolution for the Italian EV market, which is quickly catching up to more mature European regions thanks to the debut of a slew of city e-cars that are perfectly suited for local mobility. A trend that is all the more significant in a car market showing clear signs of ICE crisis.