It’s taken a long time, but Italy’s electric car market is finally starting to take off. Official figures released by Unrae (the association of foreign car makers in Italy) confirm 10,566 battery electric cars were sold in the Bel Paese in the twelve months of 2019, doubling 2018 sales and consolidating a trend of exponential growth started two years ago. But why should we care, when a much smaller car market such as Netherlands’ saw over 12,000 Tesla Model 3s being sold in the single month of December?

Italy is the fourth largest car market in Europe after Germany, France and the UK. With almost 2 million cars sold annually, an incredible automotive history and Italy’s sustainability credentials – from renewable electricity to green buildings to smart grid technology – one would expect this to be the perfect market for early EV adoption, and one whose trends to follow with great anticipation. Yet, it isn’t. Italy’s electric car market is still incredibly small, with ten thousand EVs accounting for only 0.5% of the country’s total car sales in 2019. But there are many signs for optimism, trends that show how Italy and other major countries will soon be shifting away from very low EV market share into mainstream adoption.

The most crucial issues inhibiting electric car sales so far have, predictably, been the high price and very limited variety of models on offer. In a country where city cars dominate and the average selling price is around 20,000€ (including 22% VAT), the limited choice of BEVs – and their starting price typically above 30,000€ – have represented a formidable barrier for most. Add to that the somewhat lackluster features of some early models (low range, slow charging), and the absence of adequate charging infrastructure, and you’ll understand how electric mobility has long been broadly dismissed as a viable option. Perhaps just as important, awareness has played a large, if less obvious, role. In a car market still greatly influenced by Fiat (FCA), one of the most EV-skeptic companies under Marchionne’s leadership, and by other European legacy automakers of similar mindset, car buyers could be forgiven for not knowing electric cars were even an option. That was clearly reflected by abysmal numbers, as just two years ago – in 2017 – total sales of full electric vehicles amounted to about 2,000, compared to 33,000 in the small Norwegian car market for the same year. But all this has started to change. 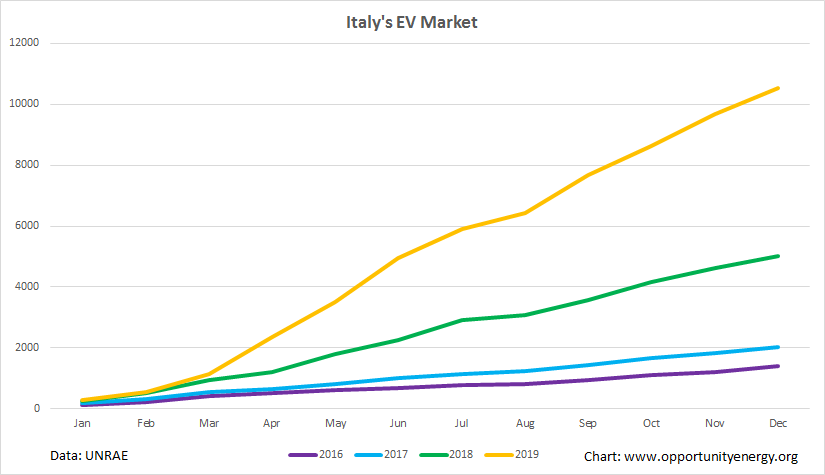 The Italian EV market has grown five-fold over the last two years. With more affordable, compelling full electric models finally entering the scene, the barrier to EV ownership has started to fade. Further, the introduction of financial incentives at national and regional level in Spring 2019 has also pushed demand. Sales of full electric vehicles thus increased to 5,000 in 2018, then further doubled in 2019 as incentives kicked in, ending the year above the psychological threshold of 10,000 units. What can we see in this early stages of Italy’s shift to electric mobility, and what can we expect going forward? The Top 10 chart gives us a clue: 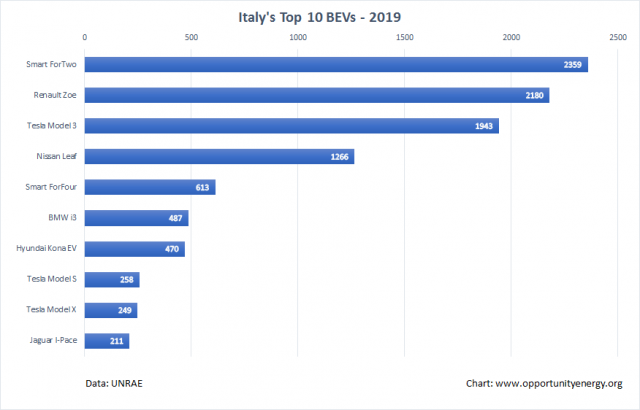 The stats are clear. Affordable cars are leading the bulk of EV growth, together with a notable exception, Tesla Model 3. We can expect continued strength from Tesla, as the brand of choice for an un-compromised EV experience (luxury, range, technology, charging infrastructure), for those who can afford €40k+ price tags, much to the detriment of similar upmarket EV offerings by legacy automakers. It is however the burgeoning segment of more compact and affordable city e-cars the one that will help sustain electric mobility’s exponential growth. The Smart ForTwo’s exploit, with over 22% of market share over Renault Zoe’s 21%, comes as no surprise.

Now in 2020, a great many more models on the lower end of the EV spectrum are becoming available: the Peugeot e-208, the Opel Corsa-e, the long awaited VW I.D. 3 and the new Fiat 500e, to name but a few. Each of these are models that could sell in the thousands and Fiat’s entrance alone in the domestic EV market marks a historical moment. As more brands finally enter the EV arena, they do so with conviction and plenty of advertising: the target is to sell. And they better do, as stricter EU emission regulations now being phased in will also mean that legacy car makers, once happily quiet about electric mobility, are now obliged to act and improve their fleets’ emissions. It is a paradigm shift for public awareness, which will be compounded by fast growing charging infrastructure: Ionity is planning to install over 20 ultra-fast chargers by end of the year, while Enel X is already implementing a plan for 28,000 new charging points throughout the country by 2022.

It is hard to make a firm prediction for the twelve months ahead of us, but it will no doubt be another growth year, with increased advertising and competition among car makers spicing up the market. It’s not unreasonable to expect between 15 and 20,000 full electric cars making their way to Italian customers in 2020, but the double effect of active advertising and EU regulations on buyers’ awareness might end up surprising us with a bang. Is Italy’s electric car market finally ready for prime time?