Posted on September 3, 2010 by Carlo Ombello 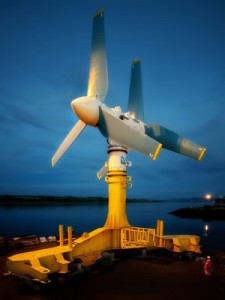 The turbine was unveiled two weeks before in Invergordon, an event attended by officials and dignitaries from seven different countries. After the unveiling, Atlantis mobilised the 22.5 meter tall, 1300-ton structure on to the DOF vessel, to be taken to Orkney. It took just seven days to install the gravity base structure, over 1000 tons of ballast blocks, finally topped up with the turbine body, complete with its twin set of 18 meter diameter rotors.

The 1MW turbine’s manufacturers say it is capable of generating enough electricity for 1000 homes. With two sets of blades, the turbine is designed to generate power from both ebb and flood tides, and to withstand the marine conditions off Scotland. Drew Blaxland, Chief Technology Officer at Atlantis, commented: “The entire team at Atlantis, together with our onshore and offshore technology and construction partners, is delighted with this installation programme. The large rotor diameter of the turbine and the tight tidal windows we had to operate within presented significant challenges, but these were overcome with meticulous preparation, a ‘can-do’ attitude and the discipline to apply the right resources to what was a major offshore engineering operation”.

The AK1000 will now get connected to the power cable recently laid by EMEC at its facility, located at the Fall of Warness in Orkney. These operations are expected to take up to two weeks, depending on weather conditions. Atlantis has established a dedicated control centre on the Island of Eday from which to control and monitor the turbine . Atlantis Resources chief executive Tim Cornelius stressed what he believes to be the key features of this new turbine model, durability and low impact on marine life: “In order to get a robust turbine we have had to make what we call ultimately the dumbest, simple but more robust, turbine you could possible put in such a harsh environment. [...] The turbines turn at six to eight revolutions per minute, so are incredibly slow-turning and will have zero impact on the surrounding environment”. Atlantis CEO goes on saying: “This is yet another significant step towards proving to stakeholders, project sponsors, regulators and the general public that tidal power is the most exciting emerging technology in the renewable power generation mix. [...] The installation of tidal turbine systems is a key component in achieving economic viability for tidal power projects. Atlantis has proven that with adequate planning, appropriate resource and the adoption of technology developed over the past 20 years in the oil and gas industry, commercial scale turbines can be installed safely and cost effectively, even in the most challenging of open ocean locations”. 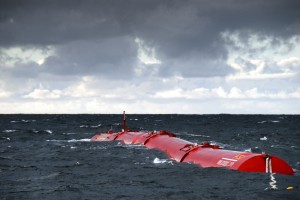 These late achievements in tidal power are very welcome news for the renewable energy business, but marine energy is still in its infancy, when compared to more mature technologies like wind and solar power. Many different ways for harnessing the oceans’ potential are being tested around the world (the wave-powered Pelamis “sea snake” among the most iconic), and no clear winner has been picked yet. This is due in part to the variety of ways in which sea power can be collected (including waves, tides, currents, osmotic and thermal gradient conversion). More importantly though, we are still waiting for any marine device to prove its resilience to prolonged testing, as many recently failed experiments have proved. The harsh conditions that any marine device has to deal with in its working environment are very unfair when compared to terrestrial units. Salt water is aggressive to any materials, and its density means that the physical stress constantly put on the machines is huge, making the design of marine devices necessarily robust and rather unsophisticated.

But there are important reasons why manufacturers still spend their financers’ money on such projects. Among renewable sources, sea power is one of the densest and most consistently available forms of energy, allowing the installation of fewer, relatively small devices, in comparison to less energy-dense and more erratic systems like wind turbines or solar panels. In other words, despite the difficulties facing the design, installation and reliable operation of these new plants, the potential rewards are massive. Ocean energy represents a vast source of energy, estimated at between 2,000 and 4,000 TWh per year. Both the U.S. and the U.K., for example, have enough ocean power potential to meet around 15% of their total power needs. For tidal current energy, there is an estimated 50,000MW or approximately 180TWh per year of economically exploitable resource available worldwide. 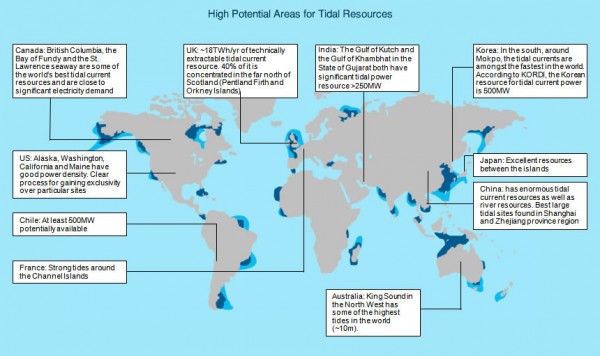 The UK is certainly at the forefront for research and development in this field, with its vast tidal and wave resources available around its coasts. But more countries like the US, Portugal, Italy are slowly pursuing this option through pilot projects. Many nations could eventually benefit from marine energy development once maturity of these technologies is reached, with the highest potential possibly to be found in North America and the far East (particularly China, Japan, Korea and Australia).

Will this latest device prove marine power is eventually catching up with more established renewable technologies? we might soon find out.

This entry was posted in Clean Energy, Water. Bookmark the permalink.