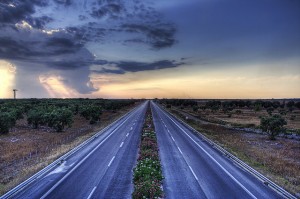 Most people will be surprised, but Italy was the first country in the world to build motorways. In fact, the A8 “Milano-Laghi” motorway (“Milan-Lakes”, as it connects the city of Milan to Lake Como and Maggiore) was completed in 1926. Time has passed and all developed nations now boast wide motorway networks, a strategic infrastructure that helps interconnecting people, places and is ultimately essential to economic growth. But Italy will soon be able to claim a new “first”: the A18 Catania-Siracusa motorway, a 30km addition to Sicily’s 600km motorway network, will be a fully solar-powered motorway, the first in its kind.

Work is well underway to complete commissioning of this cutting edge infrastructure, which will be the most advanced motorway in Europe, including many outstanding features in terms of control systems, surveillance apparatus, tarmac quality, safety features (one of its new tunnels has also been awarded for its levels of safety). Construction activities are concluded, and a quarter of its solar photovoltaic (PV) panels were already operational by the end of September. Pizzarotti & Co., the general contractor for this project, aims at having all of them online by early December (the panels are therefore feeding Sicily’s electricity grid with clean energy even before it’s used on site). Road testing is due in November, while on 1st January 2011 the Catania-Siracusa motorway will open to the public. By then, 100% of its electricity needs will be met by the PV panels installed along the road: 80 thousand of them. Lights, tunnel fans, road signs, emergency telephones, all the services and street furniture installed on the A18 will be run with solar power: distributed over a surface of 20 hectars, the photovoltaic array was obtained through the construction of 3 artificial tunnels on a 100m wide, 2.8km long stretch of road, a project with an overall cost of €60 milion. Annual solar electricity production is estimated at about 12 million kWh, which will save – constructors claim – the equivalent of around 31 thousand tons of oil and 10 thousand tons worth of CO2 emissions every year.

The Catania-Siracusa motorway is one of the first experiments where a major infrastructure and distributed power generation are integrated in one design, surely the first at this scale. Furthermore, all the green areas involved in this project will be subject to a major environmental renovation scheme: the contractor provided for planting thousands of trees and plants, improving existing tree lines and hedges, increasing the extension of local woods. This however is not the first time renewable energy and sustainability are key to a road project in Italy . In the last few months, still in Sicily, solar panels for a total of 368 kWp where installed along the A20 Messina-Palermo: they now provide electricity for all the buildings located along the 183km motorway. A thousand km away in northern Italy, the A22 Brennero motorway (which crosses the Alps towards Austria) saw the installation of a soundproofing barrier along a residential area of the motorway route: the 1km long barrier is made of solar panels able to produce some 680,000 kWh per year, thus covering 20% of the local electricity needs.

But this new paradigm in energy management is not being pursued just on single, isolated schemes: a further and more meaningful example of this shift in Italy’s infrastructure design approach is witnessed through the widespread implementation of LED road lights and photovoltaic car park shelters being rolled out in all Italian motorways by Autostrade per l’Italia (ASPI), the leading European concessionaire for toll-motorways construction and management, with more than 3,400km of the 6,500km long Italian motorway network. In fact Autostrade per l’Italia launched a series of initiatives  to promote the use of renewable sources for the production of electricity and improvement of energy efficiency in its buildings and infrastructure. The plan provides for production of electricity from renewable sources, energy saving measures for tunnels and service areas lighting, replacement of heating and air conditioning systems with high-efficiency plants, use of geothermal energy underground to produce heat and electricity and tri-generation (production of electrical, heating and cooling energy) in the main office buildings, and finally a “passive” improvement at their headquarter buildings in Rome and Florence and outlying structures (section departments, maintenance points, snow point). This actions will result in a reduction of CO2 emissions of about 40% and substantial savings in maintenance costs. In 2009, 6,378 lighting fixtures were replaced, while for 2010 the installation programme counts a further 10,766 LED units, reaching approximately 50 percent of the total. An extended programme for the construction of 100+ photovoltaic generation sites is also being completed in 2010: a first phase provided for the installation of patented PV sun-shading shelters at 87 service areas (for a total of 4MWp), while phase 2 involves design and construction of several PV sites, ranging from 200kWp to 1MWp (a mix of stand-alone and integrated modules), adding a further 3MWp.

With Italy’s solar energy boom now invigorated by the renewed Feed-In Tariff scheme “Conto Energia”, which gained the country enormous investments and the second position in the global PV market (with a projected 1,500MW installed capacity in 2010 alone), energy-driven design is finally making its way to mainstream thinking.

This entry was posted in Clean Energy, Green Architecture. Bookmark the permalink.