Italy’s EV market more than quadrupled in the first half of 2021! 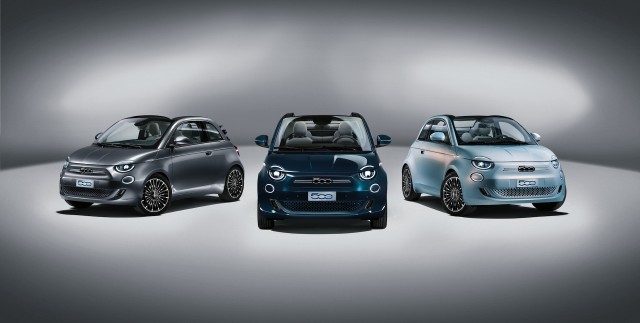 The first six months of 2021 have marked a period of yet exceptional growth for electric mobility on a global scale. Europe is leading the charge, and Italy – the continent’s fourth largest market – is now on the verge of reaching double-digit market share for plug-in vehicles, following consistent monthly growth and quarter-end peak registrations.

The latest Unrae data from June provide a new boost to electric cars. With the effects of the pandemic slowly fading away, and government incentives bridging the price gap between technologies, electric mobility is booming in the once dormant Italian EV market. With the overall car market strongly rebounding – almost 900,000 registrations in H1 compared to less than 590,000 a year ago, +51.6% year-on-year – electrified powertrains are the real winners. Traditional, mild hybrids take the lion-share of the rebound by almost quadrupling sales to reach a cumulative market share to date of 27.4%, overtaking diesels (now 24.2% share) and firmly pointing at petrol cars, still leading at 32% but in fast retreat from historic highs.

Plug-in powertrains also ride the wind of change. Full electric cars reach 30,384 registrations in the first half of 2021, close to the full-year figure for the BEV market in 2020 and over three times (!) the sales of the first half of last year, when 9,959 units were recorded in the same time frame. Cumulative market share to date stands at 3.4%, up from 1.7% in the first six months of 2020. As we move into the second half of the year, our previous forecasts seem to hold up well, and we could expect 70-90,000 BEV registrations for the full year. 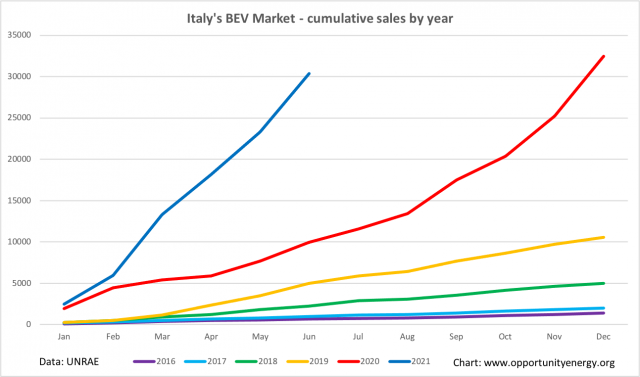 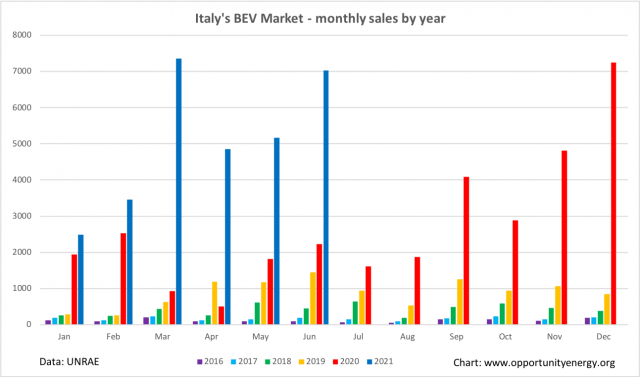 PHEVs enjoy the strongest growth with a cumulative figure of 37,937 units, an unexpected exploit that we saw unfolding over the past six months. This marks an incredible +554% year-on-year increase from the underwhelming 5.802 registrations recorded a year prior, when the market was clearly favouring BEVs instead. Plug-in hybrids’ market share for the six months thus reaches 4.3%, up from just 1% a year ago. This in turn means a cumulative 7.7% market share for all plug-in vehicles, as a total of over 68,000 units were registered marking a more than fourfold increase (!) from less than 16,000 units a year ago, when H1 cumulative share stood at 2.7%. Things are looking up and the plug-in market should be able to reach double-digit figures soon on a monthly basis.

With all the exciting news on EV adoption, the cumulative Top 10 BEV chart for H1 2021 shows some interesting changes from Q1 results, and one unbeatable best seller. 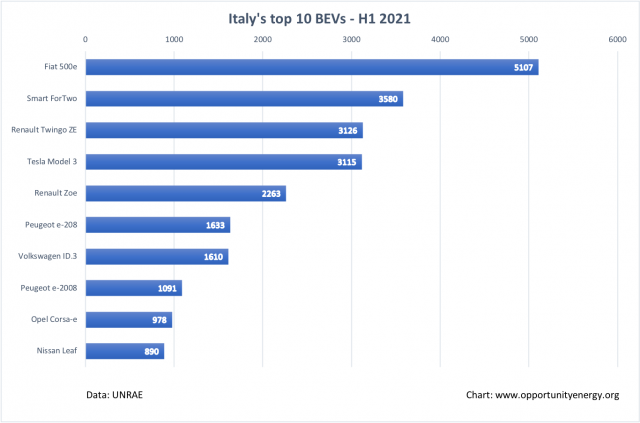 Fiat 500e is in fact unmovable from top spot. It is actually sprinting ever faster to annual best seller status with 5,107 registrations to June. Difficult to even think of any other BEV posing a threat for the rest of the year. If anything, can the little Fiat reach 10,000 units by year-end? A distant second is Smart ForTwo with 3,580 units, still an Italian favourite. Renault Twingo ZE gains third position at 3,126 registrations, overtaking ranks over the last few months thanks to consistent sales. With sufficient push from dealerships, the micro-Renault could indeed aim at second spot by the end of the year.

The annual podium is not going to be decided any time soon however, as Tesla Model 3 is a surprising fourth with 3,115 units to the end of June, barely losing the race for third place in an A-segment dominated Top 3. The next two quarterly pushes will tell us if a miracle can be achieved. Under Tesla’s great performance, Renault Zoe follows in fifth place with 2,263 units, far from its heyday results of 2020. Zoe’s ranking is in fact potentially threatened by rival Peugeot e-208, in sixth position with 1,633 registrations. Both these French B-segment models should be weary of VW ID.3, which is now starting to climb sales charts and trails in seventh place with 1,610 units. We can expect a tight race for middle ground in the second half of the year! Siblings Peugeot e-2008 and Opel Corsa-e follow in eighth and ninth position, with the eternal Nissan Leaf closing the chart in tenth place.

Following years of sustained growth from a negligible start, 2021 is an even more crucial year for EV mobility. The snowball effect caused by the current pace of growth means we will very soon witness 10% market share for plug-in vehicles in the Italian car market, a critical mass that could lead to widespread adoption sooner than most people think.

2 Responses to Italy’s EV market more than quadrupled in the first half of 2021!