Italy’s EV market tripled in 2020 – Can it triple again this year? 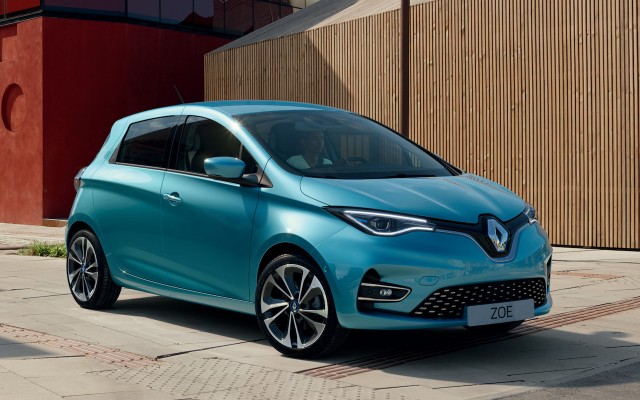 The ugly duckling of electric mobility among Europe’s top car markets is finally turning into a swan. We are talking about Italy, home to so many historic motor brands, where a once almost inexistent EV market is now blossoming into a noteworthy player as Europe pushes towards transport electrification.

If 2019 saw the first signs of a changing pace, with full electric cars doubling year on year (YoY) to reach the symbolic threshold of 10,000 units sold, its miniscule share of overall car sales – just 0.5% of the over 1.9 million units sold in the country that year – left Italy, Europe’s fourth largest car market, well under the radar of general medias’ EV interest. 2020 turned up the heat, however, with electric cars sales accelerating decisively amidst a major downturn in the ICE market. 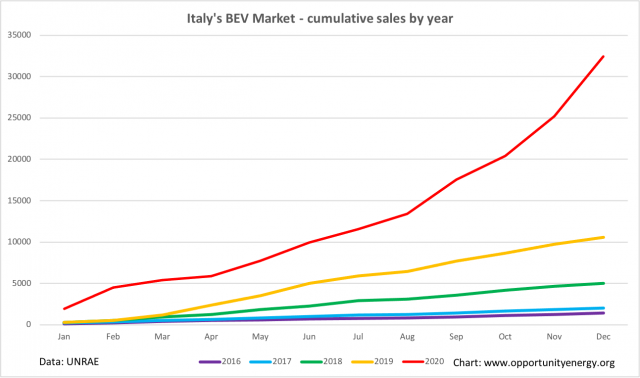 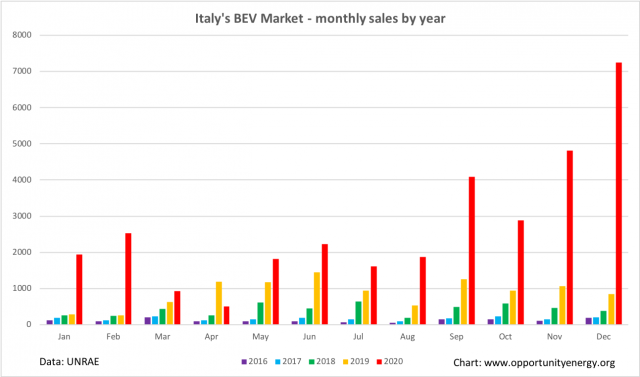 EVs proved resilient during the worst of the Covid crisis in Spring, when ICE sales got decimated, and only grew from there with the help of new and enhanced incentives, recording an outsized rise in the last four months with a stellar bang in December, as crucial new models (Fiat 500e, Renault Twingo ZE, VW ID.3) hit the showrooms and car makers rushed to register all EVs in time for year end. These trends are evident in the BEV charts above, where the exponential annual growth and monthly spikes show the extent of this meteoric rise.

So which models found success in the tough yet promising Italian arena, and what lies ahead?

Driving 2020′s unprecedented growth were mostly compact models from the A and B segments, as is tradition in the Italian market. Renault Zoe beat every competitor effortlessly, scoring high month after month to reach 5,470 registrations, almost 17% of the entire BEV market. In fact, the forerunner of compact EVs was also the best selling BEV in Europe with around 100,000 units. Smart ForTwo – 2019′s best seller in the country and a frequent sight in Italy’s narrow city streets – followed a distant second at 3,770 sales, buoyed by its unique appeal in the urban-only mobility niche. A notable exception to the rule, Tesla Model 3 ended the year in third place with 3,352 units, a spectacular result that allowed the world’s best selling BEV to beat many cheaper models to the year’s podium (its outlook for the new year is even brighter, following recent substantial price cuts).

This however may be the last time we see well-established EV models in the top three spots, as the increasing pace of brand-new EV releases is bound to greatly disrupt the market. This is already apparent with the outstanding performances of the Fiat 500e (2,175 registrations) and Renault Twingo ZE (1,172 units), which took 5th and 10th place respectively, storming the charts with just two months’ worth of sales in the year, and that will surely aim for best selling position this year. Along with Peugeot e-208 (6th place, 1,733 units) and Opel Corsa-e (8th position with 1,310), this means four models released throughout 2020 quickly made their way to the top. Whether mature models such as the e-up! (4th position), Kona EV (7th) or Leaf (9th) can hold their ranks in 2021 remains to be seen, given the slew of compelling BEVs that are about to land in the next weeks and months. 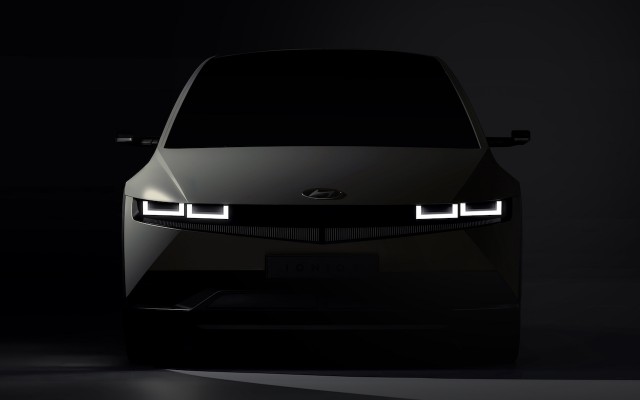 This is the year where VW electric cars go fully mainstream, with ID.3 aiming to dethrone Renault Zoe from Europe’s crown. Sales and production are rapidly increasing and the C segment German model will undoubtedly make its mark in Italy as well, with upcoming competition from the likes of Hyundai Ioniq 5 – among others – bringing the focus to features such as long range and fast charging capabilities, a required breakthrough for mass adoption. SUVs and crossovers could also have their say in the Italian market, as VW ID.4 production speeds up, and with Tesla Model Y a tough one to beat in the second half of the year. 2021 may well be the time we see family-friendly, long range BEVs starting to lift Italy’s EV mix.

Still, it is not just the charge led by new models – and the all-important entry of domestic champion Fiat in the electric scene – to fuel hope for consistent compound growth in 2021. Things will move fast, super-fast in fact, with charging infrastructure. Existing networks continue to expand, with Tesla aiming at over 50 supercharger stations by end of the year, and Ionity (20 stations installed or under construction to date) possibly doubling its presence as Covid delays give way to recovery. But they are not alone. Italian motorways are poised for a massive infrastructure upgrade – as we’ll see in a separate article – with ambitious plans for high-power chargers to be installed across the network’s petrol stations, with the first few installations scheduled in a matter of weeks.

There are plenty of reasons to believe 2021 will be another year of sustained growth for electric mobility in Italy. As markets recover from the pandemic slump of last year, a doubling of the BEV market to around 60,000 units seems likely, if the last quarter is anything to go by. And with the extension of existing incentives, new models, improving infrastructure and now eager automakers, the rise in public awareness could result in a more aggressive demand, with 90-100,000 sales as an aspirational target, if the industry will be able to keep up. How will markets respond in the year of recovery? We are eager to find out.

3 Responses to Italy’s EV market tripled in 2020 – Can it triple again this year?