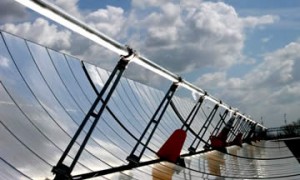 On 14 July 2010 the Italian utility Enel unveiled “Archimede”, the first Concentrating Solar Power (CSP) plant in the World to use molten salts for heat transfer and storage, and the first to be fully integrated to an existing combined-cycle power plant. Archimede is a 5 MW plant located in Priolo Gargallo (Sicily), within Europe’s largest petrochemical district. The breakthrough project was co-developed by Enel, one of World’s largest utilities, and ENEA, the Italian National Agency for New Technologies, Energy and Sustainable Economic Development.

Several CSP plants already operate around the World, mainly in the US and Spain. They use synthetic oils to capture the Sun’s energy in the form of heat, by using mirrors that beam sunlight onto a pipe where pressurised oil heats up to around 390°C. A heat exchanger is then used to boil water and run a conventional steam turbine cycle. Older CSP plants can only operate at daytime – when direct sunlight is available -, an issue that has been dealt with in recent years by introducing heat storage, in the form of molten salts. Newer CSP plants, as the many under construction in Spain, use molten salts storage to extend the plants’ daily operating hours. Archimede is the first plant in the World to use molten salts not just to store heat but also to collect it from the Sun in the first place.

This is a competitive advantage, for a variety of reasons. Molten salts can operate at higher temperatures than oils (up to 550°C instead of 390°C), therefore increasing efficiency and power output of a plant. With the higher-temperature heat storage allowed by the direct use of salts, the plant can also extend its operating hours well further than an oil-operated CSP plant with molten salt storage, thus working 24 hours a day for several days in the absence of sun or during rainy days. This feature also enables a simplified plant design, as it avoids the need for oil-to-salts heat exchangers, and eliminates the safety and environmental concerns related to the use of oils (molten salts are cheap, non-toxic common fertilizers and do not catch fire, as opposed to synthetic oils currently used in CSP plants around the World). Last but not least, the higher temperatures reached by the molten salts enable the use of steam turbines at the standard pressure/temperature parameters as used in most common gas-cycle fossil power plants. This means that conventional power plants can be integrated – or, in perspective, replaced – with this technology without expensive retrofits to the existing assets.

So why hasn’t this technology come before? There are both political and technical issues behind this. Let’s start with politics. The concept dates back to 2001, when Italian nuclear physicist and Nobel prize winner Carlo Rubbia, ENEA’s President at the time, first started Research & Development on molten salt technology in Italy. Rubbia has been a preminent CSP advocate for a long time, and was forced to leave ENEA in 2005 after strong disagreements with the Italian Government and its lack of convincing R&D policies. He then moved to CIEMAT, the Spanish equivalent of ENEA. Under his guidance, Spain has now become World leader in the CSP industry. Luckily for the Italian industry, the Archimede project was not abandoned and ENEA continued its development till completion. 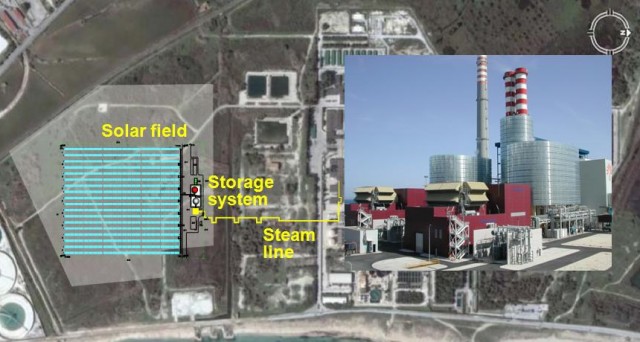 There are also various technical reasons that have prevented an earlier development of this new technology. Salts tend to solidify at temperatures around 220°C, which is a serious issue for the continuous operation of a plant. ENEA and Archimede Solar Energy, a private company focusing on receiver pipes,  developed several patents in order to improve the pipes’ ability to absorbe heat, and the parabolic mirrors’ reflectivity, therefore maximising the heat transfer to the fluid carrier. The result of these and several other technological improvements is a top-notch World’s first power plant with a price tag of around 60 million euros. It’s a hefty price for a 5 MW power plant, even compared to other CSP plants, but there is overwhelming scope for a massive roll-out of this new technology at utility scale in sunny regions like Northern Africa, the Middle East, Australia, the US.

The Italian CSP association ANEST claims Italy could host 3-5,000 MW of CSP plants by 2020, with huge benefits also in terms of jobs creation and industrial know-how. A lot more can be achieved in the sun belt south of the Mediterranean Sea, and in the Middle East. If the roll out of solar photovoltaics in Italy is to offer any guidance (second largest market in the World in 2009), exciting times are ahead for Concentrating Solar Power.

This entry was posted in Clean Energy, Power Storage. Bookmark the permalink.